HCFCD presented information on their plan to update the 2003 Texas Water Development Board regional drainage plan for the Cypress Creek watershed due to the plans being outdated after the watershed landscape has developed over time. In addition to plan updates, the presentation mentioned two stormwater detention basin projects the district was asked to investigate — one which would expand the Cypress Park stormwater detention basin on Eldridge Parkway, and another to look at potential sites around Stuebner-Airline Road.

What the Houston Botanic Garden Will Teach Us About Natural Flood Control
houstoniamag.com

The garden will transform detention basins along Sims Bayou on its property into five acres of functioning stormwater wetlands. When it debuts next year, as a collaboration with the Texas Community Watershed Partners and funded by the Texas General Land Office Coastal Management Program, the wetland area will see water levels rise and fall with rain, while also retaining stormwater for 96 hours—ah, yes, a natural sponge. As the water filters through the plants and soil, pollutants, bacteria, and metals will be pulled from the water before cycling back out, nitrogen will be absorbed, and oxygen released.

Could Water Management Be New Orleans’ Next Big Export?
nextcity.org

For years, Louisiana was the only state in the country to have a master plan for dealing with coastal land loss. Now other states, like Texas, are following suit. Louisiana´s motivation is clear: The state loses approximately a football-field’s worth of land every hour. Louisiana’s Coastal Protection and Restoration Authority estimates that, left unattended, the loss of the state’s wetlands will worsen the annual cost of flood damage from an average of $2.7 billion to approximately $19.9 billion. Yet in the face of such dire predictions, some see an opportunity for southern Louisiana to position itself as a leader in water management and to reap the economic benefits of not only addressing the state´s issues, but of selling that expertise to others.

Mayor Announces Incentives for the Spread of “Green” Development
houstontx.gov

Mayor Sylvester Turner is proud to announce the creation of a city incentives program to encourage the spread of green stormwater infrastructure in the City of Houston. The incentives mark the first step toward developing a robust green infrastructure program complemented by municipal projects in partnership with private development. “Green infrastructure in development projects will allow project backers and city neighborhoods to realize economic, social and environment benefits, while enhancing the resilience of our city,” Mayor Sylvester Turner said.

As Cities’ Interest in Green Infrastructure Grows, so Does the Need to Develop Strategies and Resources to Maintain It
ensia.com

Urban projects designed to manage stormwater promise huge benefits as climate changes — but they also demand a new kind of care. Depending on who you ask, a boom in green infrastructure installations may or may not be imminent. Merrifield sees the new generation of city employees who have grown up with climate change as eager to make strategies like green infrastructure work. Joyce is still waiting for roadway engineers to see green infrastructure as the primary, not secondary, approach to stormwater. What might be holding them back is hesitancy about how to care for the projects, she says.

Making a Case for LID 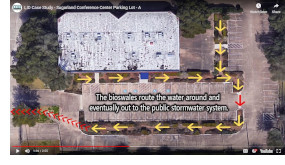 Starting with a brief explanation of stormwater runoff, this video follows the development of a LID-based stormwater solution to a frequently flooded parking lot, located in Sugarland, TX. Understand how the LID-based plan captured and slowed down runoff, allowing it to infiltrate, while the remaining water is filtered clean before exiting the property into the public storm system. Watch the entire project via timelapse. 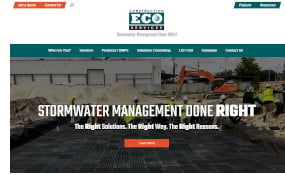 Construction EcoServices is proud to announce the launch of our new company website. The new website offers a vibrant and modern design, deep but easy navigation, and helpful tools and resources to be viewed and utilized. The new website better aligns with the company’s vision for future growth and expansion, as well as creates a more engaging and informative portal for our clients and our community.